Hey! My philosophy as a teacher is that the only way to increase your IELTS score is to work hard on improving your language skills and academic techniques. But, I would be lying if I said that I haven’t learned a few shortcuts over the last 17 years that can help students to quickly move from 6 to 7 in IELTS writing! So, in today’s blog post, I want to share my top 5 IELTS Grammar Tricks.

What, that’s it? Yes! Too many students rely on “because” to create a reason clause, but more than one or two in an essay can feel repetitive. Mix “because” with “as” and “since” to immediately boost your range of complex sentences.

☠️ Danger: Many students try to replace “because” with “due to”. This is a good idea if you finish your sentence with a short noun phrase, but it can sound very unnatural if you follow “due to” with a long phrase. It is better to use an “as” or “since” clause instead:

☠️ Danger: Result relative clauses are an excellent way to boost your score, but if your sentence is already long, it can be better to stop 🛑, and start a new one.

Don’t think that the longer your sentence is, the “higher” your score will be! Remember, your goal as a writer is to make sure your sentences are as clear and concise as possible.

Looking for help with IELTS grammar? We have a dedicated 10-hour course that is specifically designed to show you the structures needed for a 7.0+ Click here to watch the first three lessons for free. 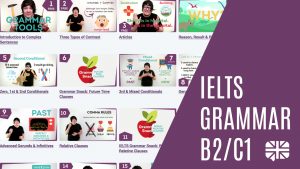 3. Don’t use “and then” in your thesis statement, use “before + gerund”

Being able to use examples to support your arguments is an important IELTS skill. However, a lot of students automatically just use “For example” or “For instance” to introduce them. Instead of doing this, why not use the expression “Take X for example”. This is my favourite transition as it can be used in two ways:

5. Add “ultimately” to your conclusion

One way of improving your GRA score is using adverbs. Students often overlook these words as they are not “necessary” in a sentence, but they are often a sign of a high-level writer. If you have to give your opinion in a conclusion, then one simple way of adding an adverb to your essay is using “ultimately” in the conclusion – it leaves a GREAT final impression on the examiner! All you have to do is add it after “I believe that”.